The year of 2018 marks the 150th anniversary of the establishments of diplomatic relations between Japan and Sweden in 1868. This is being celebrated through a wide range of activities both in Japan and Sweden throughout the year.

Short after the new year, a selected number of alumni members were fortunate to receive a personal invitation to the official inauguration event of this very special year – a celebratory concert featuring world renowned musicians of Japanese traditional instruments: Koto, Shamisen, Shakuhachi and the Satsuma-Biwa. These instruments carry a slight resemblance to a lying down harp, a large flute, a type of Japanese banjo and a round version of a lute or a cello.

On the 26th of January 2018 three representatives from SWYAA Sweden attended the official Opening Concert by Tomoya Nakai and friends at Koncerthuset in Stockholm. The event started with registration and a mingle session where we had the great pleasure to briefly talk to Mr. Jun Yamazaki, who instantly remembered us from our personal meeting at the Embassy of Japan last year. 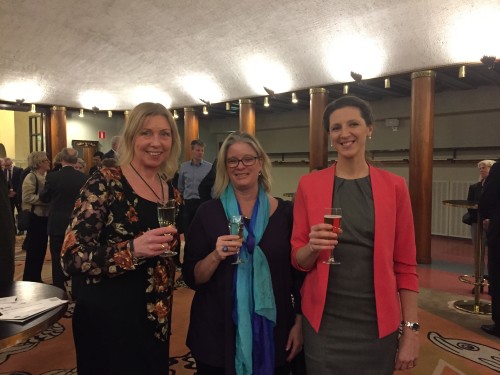 The majestic concert venue, the Grünewald Hall, was filled to the last seat when the musicians were introduced by Associate Professor of Japanese at Stockholm university, Gunnar Jinmei Linder, a very charismatic Master of Ceremonies who enlightened the evening further. Out of the twelve pieces on the repertoire nine were Japanese traditional and three were original music composed by Tomoya Nakai himself.

Mr Nakai played an impressive 25-stringed koto and was accompanied on stage in different constellations by other renowned musicians; Tomoka Nagasu (playing the flute-like Shakuhachi and the lute-like Satsuma-Biwa), Yukino Yamamoto (playing the banjo-like Shamisen) and Yuki Tashiro (playing the violin).

The musical pieces were beautifully varied, demanding utmost skill of the performing artists and displaying the wide array of musical styles in Japanese traditional music; everything from Kabuki-derived established pieces to music from the world of the Geisha and the Edo-district in 17th century Tokyo. 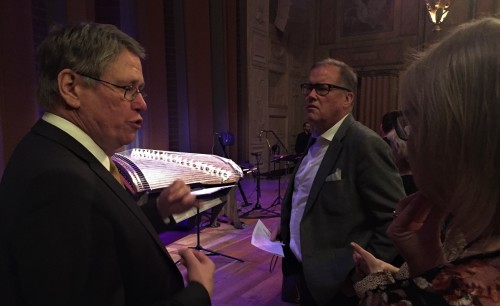 After conclusion of the last official piece the audience gave the artists standing ovations and insisted on an encore. This was possibly the greatest surprise of the evening; the team on stage performed a cover of Abba’s iconic song “Dancing Queen” on traditional Japanese instruments and vocals by Yukino Yamamoto. A fantastic closing to a mesmerizing evening that we are very grateful to have had the opportunity to take part in. Once the applause settled we also had the great luck to get a short prsentation of the instruments by Ass. Prof. Gunnar Jinmei Linder, who himself both plays and teacher the art of Shakuhachi.

Video courtesy of the support secretariat of the 150th Anniversary of
Japan-Sweden diplomatic relations in 2018.