Alumni members from both SWY and GLDP attended a courtesy reception at the Japanse ambassador’s residence on the 16th of May 2014. The function was a great success, with both informal discussions, updates on upcoming cooperations between our countries, dance performance and practice and an all new revelation about yet another cultural similarity between Japan and Sweden.

The Swedish delegation to the Global leaders development programme (GLDP) had the great opportunity to meet with the recently appointed Japanese ambassador Seiji Morimoto before their departure for Japan at the end of 2013. At that occation, the ambassador mentioned that it would be very nice to invite the delegation home after the programme to learn more about their experiences from Japan.

Reunion, reception and courtesy call in one

Fortunately for us, his intent was realised and both the GLDP delegation, as well as members from previous delegations to the Ship for World Youth programme (which are essentially the same programme), where invited to an official reception at the ambassador’s residence in Djursholm in Stockholm on the 16th of May 2014. 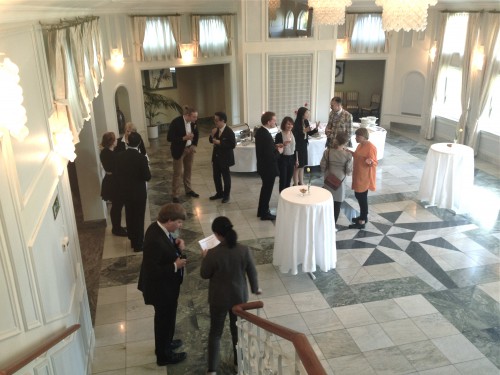 The evening of the reception turned out to be a perfect early summers eve. As we arrived and checked in at the residence we had the chance to mingle with and get to know a few of the embassy’s staff. Mr Hideki Ishizuka, minister and deputy of mission, made us feel welcome right away. Once the Mr Morimoto arrived, he greeted us and shared a few interesting insights into his work, experiences of Sweden so far and current affairs regarding youth development, for instance the ongoing discussions about possibilities of a Work and Travel visa for Swedish youth in Japan.

To show our sincere gratitude to the embassy for hosting us, and to Japan for their work with global youth empowerment, the SWYAA-Sweden handed over a small token of appreceation – a gift basket with Swedish traditional gourmet delicacies – such as handmade chocolate and liqourice and lingonberry jam among other things. 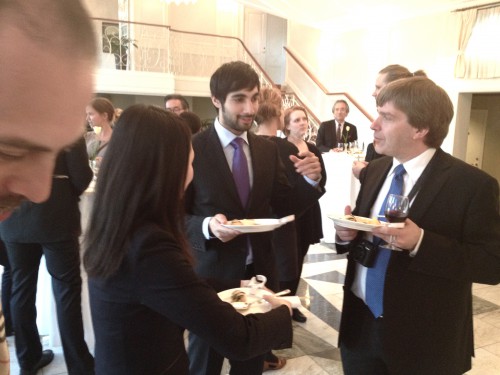 After great discussions, fantastic Japanese delights and mingling the SWYAA-Sweden transformed to a performance squad for a few minutes. It was time to dance a light, and slightly customised, version of the Japanese traditional fisherman’s dance Soran bushi. Although many of us were rusty, or had never actually had the chance to study this koreography AND we were watched by an expert – Janna Carleson who founded Sweden’s first yosakoi team were in the audience – we pulled off all the ”seh-hahs” and ”dokoshoi, dokoshoii” in the right order. Our finishing moves were followed by loud standing ovations (did I mention it was a standing reception :) by the Japanese and staff.

Invigorated by the first dance, the entire reception moved outdoors to the lawn – and following a short presentation by the GLDP-delegation members, the entire reception joined in for rehearsal of the upcoming Midsummer’s Eve dancing. Together with the ambassador, minister and the rest of the embassy staff we sang, circled the Maypole (personalised by a sport-injured K-G Eriksson), and jumped like the small dancing frogs until everyone were out of breath. 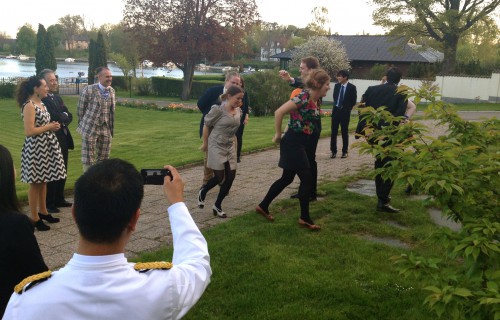 Instructions of the Jumping frogs performed by the GLDP-delegation. Photo: Carolina Hawranek

When we threw in another customary activity to conclude the games session – the Swedish clapping finale called ”raketen” (the rocket) – we were quickly matched by the ambassador’s team with ”San-san-nana” – litterally; three, three, seven. This rythmic clapping game, with short exclamations between we were told have the same function as the Swedish rocket-clap; to mark the finish of, or conclude an event in a happy, lively fasion. This was indeed the cultural discovery of the day! 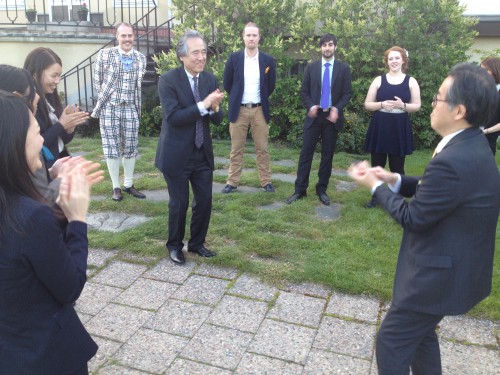 Ambassador Seiji Morimoto and minister Hideki Ishizuka show off how to do the san-san-nana. Photo: Carolina Hawranek

We would like to extend a sincere thank’s to the Japanese embassy, ambassador Morimoto-san, and Roger and Noriko who keep in touch with our alumni community and give us interesting tips and hints on Japanes related cultural activities. We hope to be able to contribute or cooperate in a joint event in the upcoming future. 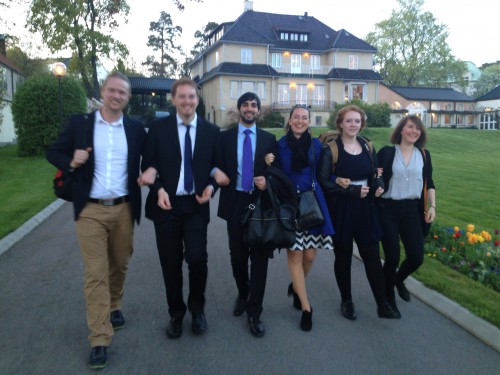 Per, K-G, Shahyan, Åsa, Anna and Anna of the SWYAA-Sweden are heading for new cultural discoveries