Ancient ruins, sparkling pisco, intriguing history, lively dance performances and unforgettable cebiche-experiences. These are only a handful things that made the 7th Global assembly in Peru such an unforgettable experience. The GA-team really delivered on all aspects – where the social contribution activities where only one high point of programme. 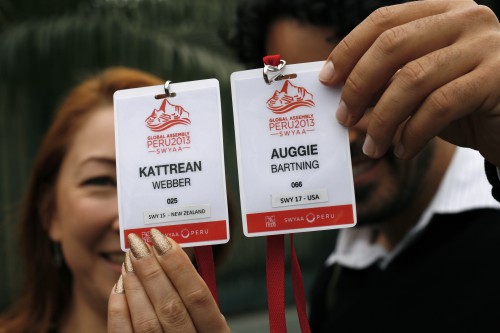 Above: Name tags recieved upon registration. Impressively – the whole welcome kit was made out of recycled or organic materials.

The yearly global assembly (in short called GA) is co-arranged by the host-nation and IYEO (International Youth Exchange Organisation of Japan). Thus, quite a few people are responsible for the highly professional and well executed event that took place in Lima, Peru between the 30th of August and 3rd of September 2013. But I’m pretty sure that Jaime Sotomayor, the president of SWYAA Peru, slept pretty well after the last participants had checked out and made it to Jorge Chavez International Airport.

Superb hosting and superfuous ice-breaking sessions in the park

Jamie was the first person I met in Peru, and there to see us off after the optional tour. He was handing out tickets one second, posing for official photos the next, partying with new found friends at night – and wide awake and eager to answer any questions in the lobby in the morning. The rest of the GA-team were just as fantastic.

The first time in Lima was characterised by a lot of heart-warming reunions. Squeeling voices and incredulous math counting the years people had not seen each other were quite astounding.  This collective family spirit spilled over on us from the more ”recent” batches as well – and almost made the ice breaking session the first day unessecary – but nevertheless loads of fun.

The competitions included a little bit of balance, a little bit of language skills and a little bit of logstics. Teams got appointed, names were learned, points scored, and winners…not announced (this was a well kept secret for later). There is still a rumour going around Lima about some hightly unorthodox activities in the park by the Museo de Arte de Lima – but we are yet to see the paparazzi proof.

The venue for the Orientation and the International Conference on Post Programme Activities was indeed vey fitting – La Asociación Peruano Japonesa (link) – where we also had the chance to learn more about the over hundred year old Japanese immigration to Peru and the Nikkei community in the country through the Museo de la Inmigratión Japonesa al Perú.

Personally this was some of the more eye-opening and intriguing facts I learned during the whole stay. Peru is indeed a fantastic example of a country where immigration and cultural diversity has enriched society and created a splendid melting-pot of cultural heritage with diverse backgrounds but with a modern and ambitious collective identity.

After Pepe’s pedagogical orientation many smiles were shared between participants as the bento boxes were handed out at lunch time – and we were gastronomically transported to Japan for a short time :). 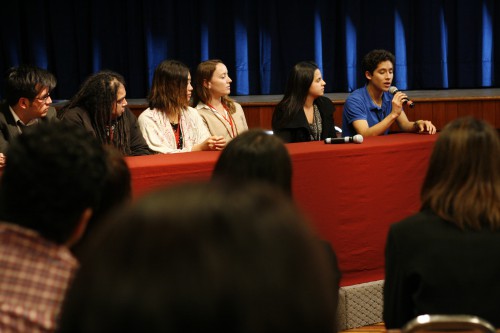 Above: Panel discussion following the presentations during the International Conference on Post-Programme Activities

The International Conference on Post-Programme Activities took us on an inspiring tour around the world of SWY initiatives. We got glimpses of Jess work with poor children in Bangladesh, the unique environmental initative of Proyecto Lomas and teh simple but clever way of contributing through KIVA microfiance by the Australian alumnies. The SWYers ”next door” – New Zealands representative Raymon reported from their identity building project there Glen Innes youth with Tongan ancestry got once-in-a-lifetime-oppurtunitites to reconnect to their roots. Besides the presentations, a number of activities were showcased by Posters and still we heard of contributions and projects who did not get a chance to be shared officially. One cannot seize to be amazed by how much energy, actions and love that the SWY-programme has generated throughout the participating countries over the years.

The first day was concluded with a lavish welcome reception at one of Limas best locations – the restaurant on the beautiful wooden pier among the salty breezes a few metres above the waves of the Pacific Ocean.

Our second day was we had Social Contribution Activity followed by Lima City Tour on the schedule. For me, who joined the educational track – the morning visit to Lima Childrens Hospital and the organisation Aprendo Contigo was tremendous but emotionally exhausting. Aprendo Contigo is a voluntary organisation working with hospitalised children – playing and educating them so they will not fall behind their class mates in school. That way, they have a real chance of getting back to their old life once they get back home. 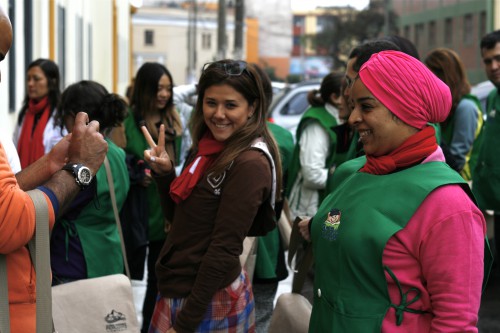 Above: Lu from Brazil and Shaikha from Bahrain in Aprendo Contigo uniform outside Lima Childrens Hospital

Among all the participants who joined us, me, Sandra from Mexico and Yusuf from Bahrain, visited the intensive care unit where two boys and three girls lived. They were taken care of by dedicated staff that seemed to know them like family. We spend a bit onver an hour talking, playing, showing them pictures of our home counties, teaching each other words in Spanish, Arabic and Swedish and laughing. But even though we left with warm hearts I could not help but feel a small pinch in my heart and sending an extra thought or two back home to my little (almost) 2 year-old Alma left with dad in Sweden.

The afternoon city tour was enlighting despite a lot of dark places. The Historic Tour which I joined took us to catacombs,  cathedrals, an incredible library (as taken straight from Hogwards) and was topped off with some shopping among the never-ending small outlets with colourful art and crafts.

Above: The waterfront in Miraflores district in Lima by night. In the foreground the Larcomar mall cut into the rock cliffs.

Even though this day was labeled Casual in the Dress Code section of the programme we did get hints that we should be prepared for some sports and recreation activities. After a bus tour past the suburbs of Lima whe arrived at the site of the Pachacamac ruins. Not nearly a known as Machu Picciu – the sites original construction is attributed the Wari civilisation – predating the Incas by centuries and is five or euight times the area of the famous Incan city ruins (that we did get the privilige to visit during the Optional Tour). Beeing the goal of the dedicated wanderers along the Qhuapaq Nan (Royal road) – Pachacamac consisted of a large array of buildings dedicated to different gods or celstial bodies – where the largest is the Temple of the Sun – magnificiently situated on a hilltop with views over the arid desert surroundings stretching down to the beached of the Pacific.

The afternoon was another high point of the official programme. We were invited to the Quebrada Verde community in the rural surroundings not far from Lima. Among all the sand and desert suddenly we drove up a valley where the sun rays hit the mountain walls green with lush vegetation. Even though these are some of the driest areas in the world – the fog coming from the ocean brings enough vapor during the winter months that the earth springs to life for a few months – hence the name of the village. 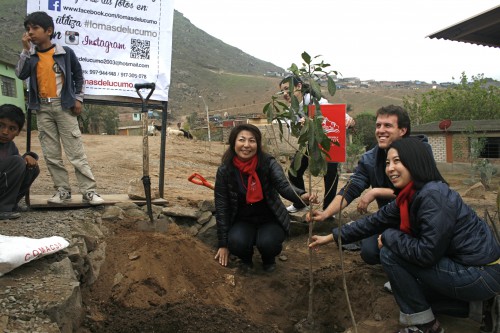 Above: Tomoko-san, Jaimie and Tamae-san planting a tree in Quebrada Verde

We were warmly welcomed with information about the local nature trails and environmental work done by local volunteers. As symbolic contribution to this work – one representative per country planted one tree each – toghether with youth from the local community. For those interested you can follow their work at www.facebook.com/lomasdelucumo.

The local youth community had prepared a great team challenge for us, with competitive disciplines of the most creative sort culminating in the finals – races through a homebuild – but indded quite impressive – wooden obstacle course. Canada and Sweden still has an uneven score to settle at the nearest possible time :).

Final day of the official programme was a day of drink preparation, cooking, drumming or painting – depending on what activity one had chosen. As one of the Peruvian-art participants I was lucky enough to visit a suburbian art work shop where local pottery was made, burnt and painted. We did get to try our own skills at this and were indeed amazed by the skills and knowledge at work.

The farewell lunch was hosted by a family restaurant of an ex-PY and although the diplomas were handed out and thank-you speeches made we were not that sad. Sure, some of us hade to say good buy, but almost three quarters of the entire team were going on to Cuzco and the Andes for the adventures of the Optional Tour. But that’s a whole different story…(although some speak previews are provided in the picture gallery).

Once again – many thanks to everyone who organised, participated and supported the 7th SWY Global Assembly in Lima 2013. If every GA is even half this much fun – this will definitely not be the last I will attend. Next year – the GA is scheduled to take place in Turkey – see you all there! (Keep posted by following the latest news on Twitter with #SWYAATurkey)

Sneak peak from the Optional Tour: 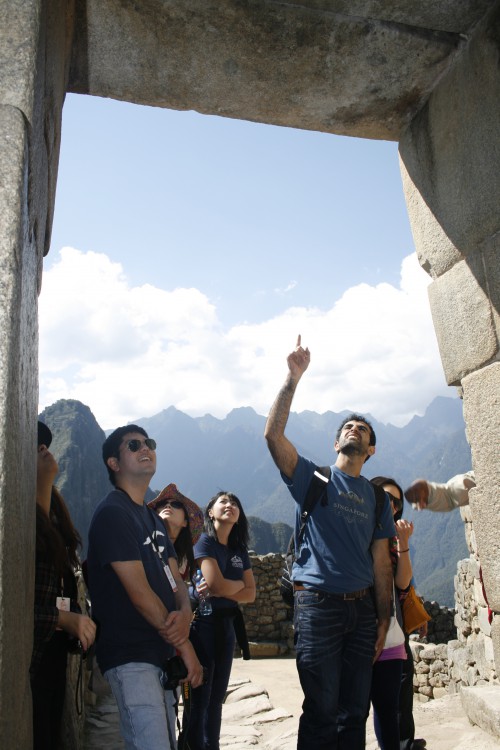 Above: Hiroki and Shuaib inspecting the main gate to Machu Picciu